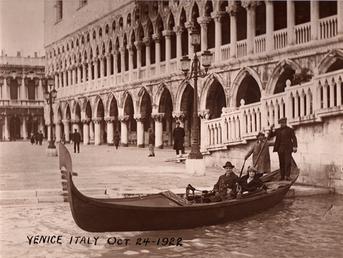 I grew up with an 8 x 10 photograph of my great aunt and uncle sitting in a gondola in the canal in front of the Doge Palace, marked Venice, Italy October 24 -- 1922.

I was mesmerized with this photograph and dreamed about visiting Italy and especially Venezia as soon as possible. It seemed so exotic -- the magnificent colonnades of the palace, the quiet open space of the Piazza, and the elegant costumes travelers wore in the 1920s.

I brought that photograph with me when I moved to California. It adorned a wall of every place I lived. We moved to Ocean Park (Santa Monica), which is right next door to Venice, California. This Venice of America would be the only Venice I would experience until my early 50s.

In the meantime, I have had a studio in Venice, California since 1995. I read all that I could about Abbott Kinney and his re-creation of Venezia, here in California. Much had changed since the turn-of-the-century, but there still remained a few canals, and a small handful of buildings with colonnades. I photographed the colonnades and used the image for my business card. I left the graffiti that was scratched on one column to define that the photo was taken in Venice rather than Italy's living museum. The architecture seemed so magnificent, that I couldn't imagine that a single stroke of graffiti would ever be allowed to remain on any structure within the boundaries of the city.

It took an invitation to show my work at the Venice Biennale of Architecture in 2006 to finally visit Venezia. As we approached by boat, the first site of Venice was dazzling. I was truly surprised though when we disembarked.   To get to our flat, we had to move through crowded corridors amongst a mass of tourists wearing shorts and T-shirts. My dream was shattered, as the crowd appeared no different than one would encounter on a typical Saturday afternoon on Ocean Front Walk at Venice Beach.  Litter and graffiti were everywhere.  The pigeons were just as ubiquitous as their California counterparts.

Fortunately for my husband and myself, I am a photographer who specializes in night urban landscapes. We explored Venezia after most of the tourists had returned to the safe familiarity of their cruise ship, bus or hotel room.  Only like-minded travelers remain on the streets after dark.  Venezia, like Venice is given back to its residents as soon as night falls.

The Vernissage of the Biennale was magically staged outside the Arsenale. My light silk coat billowed out from the warm wind. A jazz band performed as champagne flowed freely. On the other nights, we listened to great music in sparsely populated piazzas and enjoyed wonderful meals in outlying neighborhoods.  We explored the canals by boat, under a full moon.  The songs of the gondoliers echoed throughout the rooms of our flat.And so, the romantic vision that stemmed from a lifetime of viewing that 1922 photograph finally came to life.Type your paragraph here.